Boston voted overwhelmingly against a planned East Boston substation. Does it matter?

Michelle Wu says she’ll look at “every possible tool available to intervene.” But for now, the project remains on track, in the face of intense local — and now citywide — opposition.

Mayor-elect Michelle Wu may have won a commanding victory, but it was hardly the most decisive result in Boston’s November 2, 2021 municipal elections.

Close to 84 percent of voters citywide cast their ballots in opposition to an electric substation that Eversource plans to build along the Chelsea Creek in the Eagle Hill neighborhood of East Boston.

Activists say the lopsided result of the nonbinding ballot question sends a loud and clear message about where Bostonians stand on the project.

And yet the outcome also begs the question: Will it change anything?

Despite years of vocal community opposition, the state’s Energy Facilities Siting Board approved the location of the substation back in February, and Eversource is indicating no plans to change course in the wake of last Tuesday’s result.

“This substation is a critical component of the electric infrastructure needed to meet the significant demand for electricity in the East Boston area and reliably serve all our customers, while also helping the city achieve its ambitious carbon-reduction goals,” Chris McKinnon, an Eversource spokesman, told Boston.com in a statement, noting that the company is committed to addressing concerns and implementing feedback from the City of Boston and its residents.

Local advocates have disputed that the substation is needed. Furthermore, they argue the planned location — across the street from a popular park and playground — raises concerns about climate vulnerability and safety in a low-income neighborhood that is already burdened by pollution from Logan Airport and stores the region’s jet fuel and almost all of its home heating oil.

GreenRoots, a local environmental justice group, has filed an appeal of the EFSB’s decision to the Massachusetts Supreme Judicial Court. And in the wake of last week’s election, Wu says she is “committed to exploring every possible tool available to intervene” in the project.

“The people of Boston overwhelmingly reject the proposed location of the substation in East Boston in a flood plain, in a residential area, in an environmental justice community — and so do I,” Wu told Boston.com. 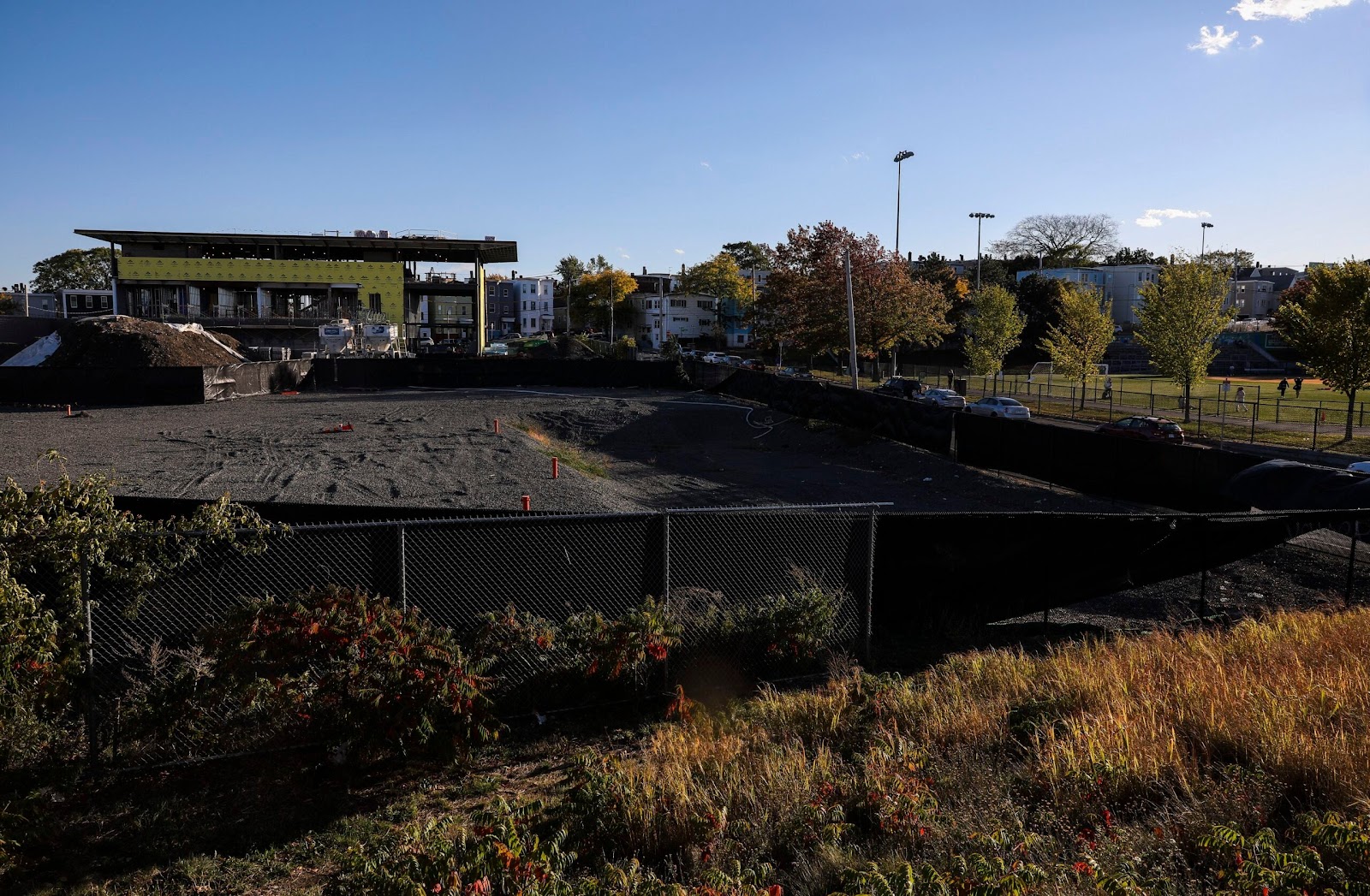 The site of the proposed substation under construction on Condor Street in East Boston. – Erin Clark / The Boston Globe

#NoEastieSubstation note: the work being done is remediation not construction of the substation. The substation is far from having final approvals and is the subject of multiple pending reviews.

But for now, those tools remain unclear, and the project remains on track — despite a fraught, years-long process.

Eversource first proposed the electric substation in 2013 on the other side of the property. However, after an adjacent fish company raised concerns about the substation’s electromagnetic radiation interfering with its equipment, Eversource moved the proposed site to a location along Condor Street, behind a planned police station and across the road from the American Legion Playground.

John Walkey, an East Boston resident and waterfront initiatives director for GreenRoots, says their concerns are not with the electromagnetic radiation (studies have not clearly linked the energy waves with adverse health effects, and the closest homes are several hundred feet away).

Rather, their concern is about the substation’s vulnerability to future storms and sea level rise due to climate change. Walkey points to the New York City transformer explosion during Superstorm Sandy in 2012 as an example of the hazards, particularly so close to East Boston’s jet fuel storage tanks.

“Having an explosion in your neighborhood is nothing that we want,” Walkey said. “Having it like 100 meters away from 8 million gallons of jet fuel is, again, not anything we want.”

Eversource argues those concerns are overblown. The planned substation is 450 feet from the nearest jet fuel depot, which the company says “far exceeds the minimum required setbacks” for fuel storage tanks. Additionally, Eversource says the substation’s elevation and design is built to withstand 500-year floods and projected 2070 sea level rise.

Walkey says the substation would still face threats from the most severe storms with the sea level rise that is projected in 2070. Already, he says, Condor Street is closed a couple times a year due to flooding.

“This winter, we will see flooding, and it’ll be on Condor Street, and it’ll be right in front of the location of this substation,” he said. The location of the planned electric substation (circled).

Eversource says the substation, which is part of a larger regional reliability project, is needed to meet growing energy demands in pockets like East Boston, where the population and development has grown. While statewide energy demand has flattened, if not declined, over the last few years, the company points to projections showing the Chelsea and East Boston peak energy demand could exceed capacity as soon as this year.

Opponents says Eversource’s previous projections have not met, and that the projections do not account for the impacts of increased energy efficiency, solar power, and the COVID-19 pandemic on energy demand.

“From what I have seen, the substation plan is based on flawed projections and flawed priorities,” Acting Major Kim Janey said in a statement earlier this year.

Even if it is needed, opponents say the project should be subject to increased scrutiny, due to its location in East Boston — a lower-income neighborhood that is majority people of color and immigrants, which is already home to a significant amount of energy infrastructure.

“We’re carrying a burden for the region —for Boston, Greater Boston, Massachusetts, and New England,” he said.

GreenRoots had repeatedly advocated for relocating the project on Logan Airport property, where it would less vulnerable to sea level rise and farther away from the neighborhood; according to Walker, about a third of the electricity going through the substation is estimated to serve Logan and the expansion of Terminal E.

On its website, Eversource said it examined alternative locations and found they would be “significantly more expensive” to build at the scale “required to meet the projected need.” Asked about relocating to Logan Airport property, McKinnon cites a number of obstacles, including building on customer property, finding land that is big enough for the station, and the construction work required to dig up and run lines under several hundred yards of street.

Of the suggested airport location, he said it’s “just not a feasible one for us at this point.”

Walkey expects GreenRoots’s appeal to be heard at some point next year. Attorney General Maura Healey, who criticized the substation’s approval, has declined to represent the EFSB, so the timing of the process remains unclear.

In the meantime, Walkey thinks the city should be considering options like eminent domain to halt the project.

In addition to 84 percent of Boston voters, East Boston’s elected officials at virtually all levels of government have spoken out against the substation; Walkey says the most impactful person yet to weigh in is Gov. Charlie Baker.

“The one voice we have not heard has been the governor,” he said.

Baker’s office did not respond to a request for comment this week.

Walkey noted that the state’s Energy and Environmental Affairs Secretary Katie Theoharides, who chairs the EFSB, said the environmental justice concerns “weighed heavily” on her mind during the meeting last February.

“There’s no question that now is a time for policymakers to seriously consider the prior injustices of how and where our infrastructure has been sited,” Theoharides said at the time, according to WBUR.

She went on to vote with the rest of the board to approve the substation’s location.

“The people who actually have the authority and the wherewithal to say, ‘Wait a minute, this should be looked at a second time, given the amount of pushback it’s getting’ — those people are not doing anything,” Walkey said.